CONTACT: This email address is being protected from spambots. You need JavaScript enabled to view it.

All sea turtle species in our planet are endangered. The common identification and tagging systems have limitations and drawbacks. The photo-identification is an innovative control and recognition system based on picture analysis of the  head scales pattern (they are exclusive of each individual, as if it were a human fingerprint). Created by Neotropico Foundation, PITMAR (Sea Turtle Identification Program by its acronym in spanish) is formed by a computer algorithm and an associated database (with information, pictures and history of each specimen) that performs the work of photo-identification easily. The PITMAR is versatile, non-invasive, free, accessible online from anywhere in the world with Internet access and has been created with the support from the Ministry of Agriculture, Food and Environment of the Spanish Government through Biodiversity Foundation. The aim of PITMAR is to contribute to the conservation of sea turtles, facilitate research and promote international cooperation for optimizing tasks of control and monitoring actions during sightings registration, in breeding beaches and during rescue, rehabilitation and reintroduction procedures. 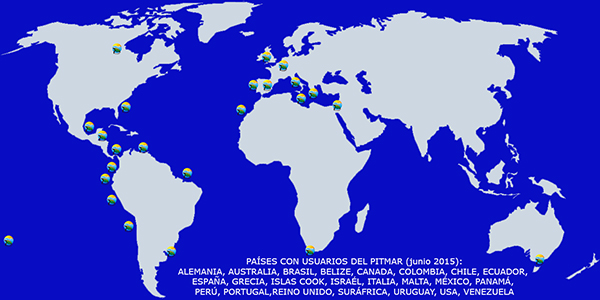 The individualized recognition of marine turtles brings significant benefits and can be used for a variety of analyzes, such as clusters and stability of the groups, association degrees between different specimens, spatial fidelity, displacement, population size, seasonality, admissions and readmissions in rescue centers, and so on.

Traditional identification systems are based on four methods which, although they partially fulfill their function, have significant drawbacks.

The use of PIT tags is very reliable but, marking animals with a  movement range that allows them to travel thousands of miles, generates a problem finding transponders and readers approved worldwide. Most of the time the readers of these electronic devices are not compatible between different countries and even, in many areas, people simply lack the devices to check the microchip. It is advisable to use this  as a supplementary method with photo-ID.

Although even some scientists still use them, the metal or plastic rings (which have shown previously their effectiveness) become a serious threat to the survival of sea turtles, being a place that facilitates entanglement and suffocation serving as anchoring places for waste and floating garbage. Turtles, sometimes, lose the tag or some flipper so redundant marking cases are given. It is advisable to completely not to continue using this practice that seriously harms sea turtles.

The living-tag is a system consisting on surgically remove two living bone fragments from plastron and the carapace (a dark dorsal and a clear ventral) and reimplant them exchanging position. This can be done using a  combination code for the plates in which the fragment was reinserted (leaving a clear mark on the back and a dark one in ventral location for the exchanged fragments). The problem is that this is a traumatic process and with a limited number of possible combinations, and also produces a small amount of potential specimens tagged individually.

Satellite Tracking. This system provides valuable details about travel, location, diving times, diving depth, and more. They are very expensive devices, which require extra costs to receive regularly those data supplied by the satellite land base. They also come off after a while, are lost and they may hinder movements in young specimens, attract predators or even facilitate entanglement with rubbish in the ocean.